Breaking News: Richard Flanagan won the 2014 Man Booker with his novel The Narrow Road to the Deep North. 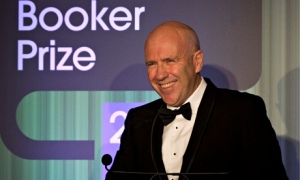 This morning I listened to his interview with Guardian Books. The first thing that struck me was here was someone who actually spoke in perfectly formed eloquent sentences! But then I concentrated on what he had to say. This short extract from a longer interview awed me.

“Every book is just a crack diary of your soul for the time you write it. I don’t feel this book is any more or less personal than Gould’s Book of Fish.

I think you strive to find a form, a voice, that allows you to achieve a transparency between your soul and your words, but the great sin for a novelist, for any artist really, is to allow those forms to become fixed and permanent because your soul is constantly in flux, and to use the same tropes, the same voice, the same style is inevitably then to be using something that once told a truth but which becomes a lie, and at that point you’ve cheated your reader. So as your soul constantly moves so must the forms you employ. So stylistically, in terms of its subject matter, it is entirely different from Gould’s but it’s true to the same sense that I have that writing is essentially about seeking to discover within your own soul, the universe – you know, all people, all things, the living and the dead – and finding through the story, the character, the way of communicating the incommunicable things we all carry within us.” 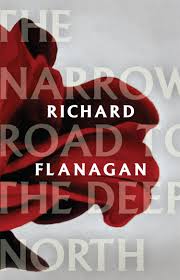 The rest of the interview can be heard here. Critics Alex Clark and Stuart Kelly discuss the results of the Man Booker before Richard Flanagan reads from The Narrow Road to the Deep North and then answers questions on how he came to write it.

This entry was posted in Books, fiction and tagged fiction, form, Man Booker, Richard Flanagan, The Narrow Road to the Deep North. Bookmark the permalink.

4 Responses to Richard Flanagan on his Man Booker winner