Posted on December 7, 2013 by Karen Whitelaw

Writers can become disheartened, but it’s the ones who have the persistence to keep working through uncertainty, through the lack of recognition and acknowledgement, who have the highest chance of succeeding.

Over the last month I’ve witnessed a rush of good writers who have seen their hard work pay off. Their achievements are an exciting tribute to their persistence, skill and creative imagination. Hearty congratulations and three cheers for the following writers.

Maree Gallop won second prize in the Hunter Writers’ Centre Grief Competition for her short story, The Clothes Heist. Her beautiful story is included in the anthology of short-listed stories titled Grieve, which is published as an ebook on Amazon. If Maree’s story and the moving piece which was read at the launch last Thursday is any indication of the quality of the publication, it is one not to be missed. Selling at $0.99 it’s a steal. 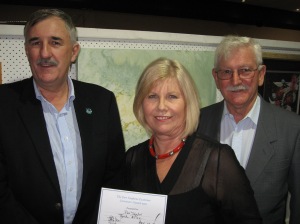 It takes courage to send out writing to competitions and publishers, and it can be shattering to continually get back rejection slips. What counts is getting back up, brushing off the dust, working hard to improve your skills and persevering. But, above all, immerse yourself in the pleasure of writing.

Who knows, next time it might be your turn.