Big Journey of a Little Fiction

Posted on September 9, 2016 by Karen Whitelaw

Who would have believed that one little 200 word story could travel so far? Other stories I’ve had published, 20 times as big, live in the dark pages on my bookshelf after their five minutes in the spotlight. ‘Koi’ keeps getting asked out as if she’s the popular girl on Tinder.

When ‘Koi’ was shortlisted for the Newcastle Writers’ Festival Microlit short story award, director Richard Holt made a movie about her. (Drum roll) ‘Koi’ won the Oscar, and her movie was screened at the iconic Civic Theatre. If you haven’t seen it yet you can watch it here. 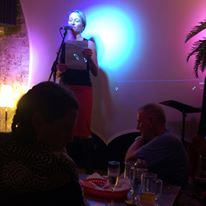 A month later she was invited to the Sydney Writers’ Festival session of Little Fictions’ Sydney Stories at the Knox St Bar, and read by actor, Holly Myers, to a full house.

This month ‘Koi’ came back from the Melbourne Writers’ Festival and the launch of the Award Winning Australian Writing 2016 anthology published by Melbourne Books in which she’s included. The launch was held at the grand sandstone Athenaeum Library in Collins Street, which somewhat made up for having to be read by the author instead of a professional actor. 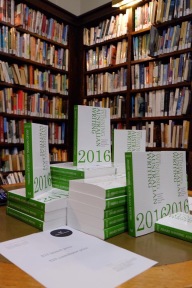 This week ‘Koi’ has learned she’s performing with Spineless Wonders at Book Expo Australia 2016 in Sydney on the 8 – 9th October. She will be part of the initiative called story phone. You pick up the handset of a 70s
style push-button

telephone and press a number to listen to one of nine stories.

As a work of fiction ‘Koi’ may be tiny, but the opportunities and possibilities for micro-fiction are enormous and excitingly varied. As you can see from Koi’s journey.

Want to try your hand at writing short fiction? See What is Microlit? for writing tips.

And then check out the burgeoning avenues for microfiction, including creative short fiction publisher Spineless Wonders.

20 Responses to Big Journey of a Little Fiction