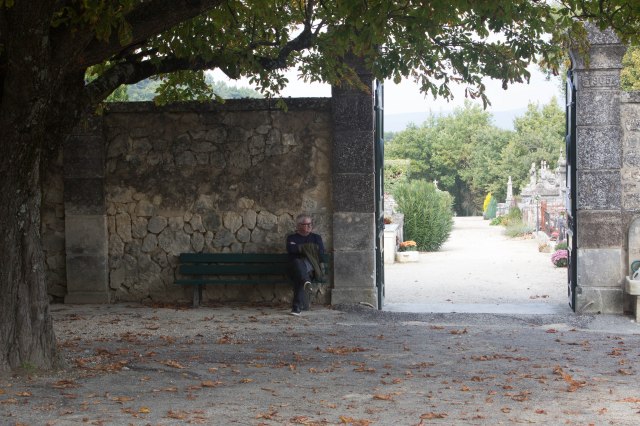 Robert Dessaix’s latest book is called ‘What are days for?’ That question keeps popping up in my mind every day here. When I’m climbing up the old stone stairways worn in the middle from centuries of footsteps. Or walking through the cemeteries of lichen encrusted family tombs as I did this morning.

Dessaix thought about this question when he was lying in a hospital bed teetering on the edge of death after a massive heart attack. Thankfully my motivation is very different. I keep asking myself this question because this part of France is overwhelmingly heavy with the centuries of lives that were once lived here.

It’s in the ruins of Oppede-le-Vieux where the trees and vines have taken root in the roofless renaissance kitchens.

It’s in the beautiful, but now damaged, Chapelle Saint-Blaise in our street. It was built with humble dedication by the Brothers of White Penitents, but during the French Revolution was used as the republican meeting place.

It’s in the name given to our street to commemorate Kleber Guendon who was shot here in 1944 fighting with the French Resistance.

Every corner I turn, every village I visit, makes me think about those people. What haunts me so much is the sobering thought that those people have used up all their days.

They no longer have the privilege of asking themselves that question. Which is what compels me to ask myself, ‘What are MY days for?’ And even more, to be grateful that I’m able to ask it.

The Brothers of White Penitents and Kleber Guendon probably asked themselves that question, and made choices that determined what their lives would be.