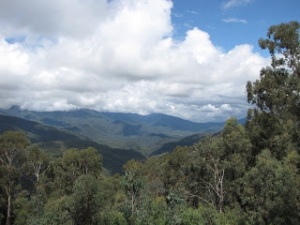 I can’t stop mulling over David Malouf’s idea about how we apply what we learned about dimensions and space in our earliest childhood to whatever else we go on to look at.

When I think about my childhood home I think about wide horizons and huge sky. We lived on top of a hill, separated from the houses below us by a sudden sharp incline. There were five houses scattered along one side of the road on the ridge. Ours was the first. Then Old Jack’s, a shuffling man of 90, who lived in a one room timber shack surrounded by a small orchard of plums and apples, and who kept lollies in a glass jar for us kids when we chopped wood for his stove. On the other side of him lived an exotic Polish family with three boys who emigrated after the war. Our brood of cousins were next to them and then Young Jack, who was on the wrong side of middle-age.

This formed my earliest community, the place I unquestionably belonged and felt safe, an eyrie separated from the rest of the world which I could see stretching out below us and far into the distance.

So what did I learn about space from growing up here?

I learned it was so open-ended and vast my place in it was insignificant. During the day we had a boundless sky and at night the mysterious sweep of a universe. In sweltering summers we would wait longingly for the bruised and angry clouds of a southerly buster to storm over the horizon, and to the west and the north watch the smoke from the bushfires billow above the ranges or streaking their bloody reflection on the night sky. These were also hints there were mysterious, exciting and frightening places beyond what I could see. 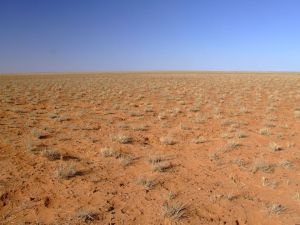 The first time I became aware of a different set of spacial understandings was when I became friends with a Japanese exchange student who attended my secondary school for a year. During a holiday break he was taken to the centre of Australia and Uluru and came back shattered. His voice quivered as he told me about standing on the Nullarbor Plains. In every direction the desert stretched all the way to the horizon, and he could even see the curvature of the earth. He was so terrified and dizzy he threw himself on the ground and clung to a tussock of spinifex. As he told me he stared like a petrified kangaroo in the headlights.

I tried without success to imagine his fear. Awe, yes. But terror? His English was poor but in an attempt to explain his fear to me he put his hand up in front of his eyes saying “Tokyo is tall buildings” and “mountains”.

A few years ago I achieved my dream of finally stepping onto every continent on earth.

Antarctica. It was ravagingly beautiful. Icebergs of such a pale blue they seemed transparent. Brilliant white light as if a magic spell had just been cast or we were in the middle of a holy visitation. Antarctica was frightening in the sense of being savage and icily indifferent to life, the conditions so unforgiving and volatile no man could survive in them unaided.

But it was also familiar. The wide sky. An ancient continent where geographical timelessness is everywhere apparent. The insignificance of man and his transience. An awe so overwhelming it’s sometimes painful to contain it.

While I can see now that I apply my earliest readings about space and dimensions to where-ever else I go, something else happens too. Other places force me to look again at the place where I grew up, the place that shaped me as my Japanese friend’s space shaped him, the place that is so familiar and ordinary to me I often take it for granted. When I look at the place where I live with the new understandings I’ve gained, I see just how complex and strange, and how extraordinary it is.

2 Responses to More Readings of Place