The Book that Changed Me 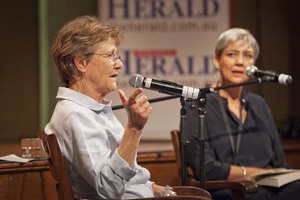 The opening session at the Newcastle Writers Festival was titled The Book that Changed Me with Helen Garner, Michael Robotham and Jessica Rudd in conversation with Caroline Baum.

Baum led the way through a glad bag of topics, and at times sat back while the panellists diverged and asked each other questions. Not that the ensuing discussions weren’t interesting: what did the authors read when they were ensconced in writing a book? What made a great book? Did the lives of favourite authors influence their lives? What films are better than their books? What were the downfalls and advantages of making contact with admired authors? Do characters have to be likeable?

But back to the topic…

How did these books change Helen Garner?

Poet Charles Reznikoff read court documents from the holocaust trials and compressed the stories into short sincere and objective pieces published as Testimony. The same striving for objectivity and sincerity are a powerful force in Garner’s own courtroom non-fiction. 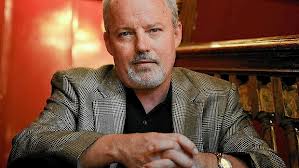 How was Michael Robotham changed by these books?

As young man Robotham wanted to be Hemingway. He went to Paris to visit the places Hemingway mentioned in this memoir about 1920’s Paris. He walked down Hemingway’s streets, visited the places he lived, wrote in the cafes where Hemingway had written.

Garner asked Robotham if it was a male thing to model yourself on another writer. Women don’t do that, she said. Off topic perhaps, but what an interesting notion. Unfortunately it wasn’t taken up.

Michael Robotham related a lovely story about his contact with Ray Bradbury that certainly changed his life. After reading all Bradbury’s books available in Australian by the time he was eight or nine, Robotham wrote to Mr Bradbury, care of Random House in New York, to lament the problem.

Months passed and one day Robotham came home from school and sitting on the kitchen table was a brown paper parcel that contained the five titles he couldn’t get, along with a letter from Bradbury saying how thrilled he was to have a fan on the other side of the world. From that moment Robotham decided he wanted to be a writer.

Last year, Robotham wrote about that encounter for a publisher’s website in the US, saying he regarded Bradbury as his literary father. Shortly after, he got an email from Bradbury’s daughter, saying that she had read the piece to her 91-year-old father who was blind; she said he cried as he listened to what Robotham had written. He wanted Robotham to know that he considered him his honorary son. Robotham planned to visit Bradbury when he went to the states later in the year but sadly Bradbury died a month before the visit.

When Rudd was 18 years old she read Primary Colours and was horrified by the cynical portrayal of politics that focused on power. In her view it totally missed the point of politics: to make a better place. Her Ruby books came out of wanting to present that alternative focus of political purpose.

So what was the book that changed my life? The Alexandria Quartet by Lawrence Durrell.

I was in my early 20s when I read the 1st novel in the quartet – Justine – a first person narration by an Irishman about his affair with his friend’s exotic Jewish wife. Then I read the 2nd – Balthazar – and heard a completely different view of the same events told by a competing narrator.

By the time I got to the last novel I understood probably for the first time that life contains no such thing as a definitive reality. These characters had all lived through the same events but their perspectives were completely different, limited in alarming degrees by their personalities, their own experiences and their knowledge of what shaped these events. The last novel in the series, Clea, is set six years later. The effects of time revealed another layer to the events.

Some people could say I still don’t have a grasp on reality today. If ever I do get a grip on it, pin it down and tie it up so it can’t move, that’s when I’ll start to worry.

A year after reading The Alexandria Quartet, and because of reading the book, I got on a plane to Egypt. Now that changed my life in more ways than it’s possible to relate here.

What is the book that changed your life? How?

5 Responses to The Book that Changed Me